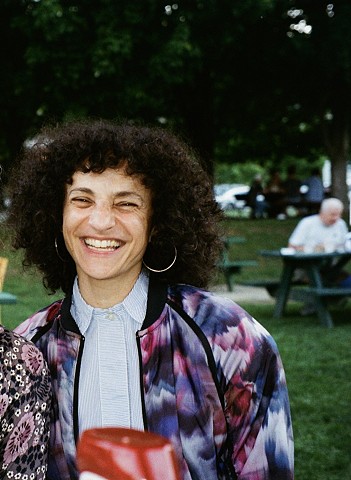 Rachel Bernsen is a choreographer, performer, dance educator and certified Alexander Technique teacher. Her current artistic practice includes hand-drawn animations, live-action film, and pencil drawings. Stay tuned for upcoming collaborations using these new mediums. Recent projects include Ceremony of Strangers (working title), a curatorial improvisation project wherein artists from a range of disciplines come together for a series of performances (postponed due to COVID); I Know You So Well, A Sound and Movement Choir for People Who Work in Healthcare, a multi-disciplinary work of movement, text, voice in collaboration with writer Rachel Kauder Nalebuff, commissioned by Artspace, New Haven. Rachel recently performed with Yvonne Rainer and Emily Coates in a reconstruction of Rainer's Parts of Some Sextets (a seminal work from 1965) at Performa 19. She is a founding member of Masters of Ceremony, an interdisciplinary improvisational quartet with dancer and choreographer Melanie Maar and composer/performers Taylor Ho Bynum and Abraham Gomez-Delgado. She's created multiple works with visual artist Megan Craig including Traveling In Place (2017) for The Yale University Art Gallery and Colorada (2015) for Kunstverein Grafschaft Bentheim in Neuenhaus, Germany.

Rachel has done multiple projects with composer Anthony Braxton including as choreographer for his Sonic Genome Project (Torino Jazz Festival, Torino, Italy), as choreographer and performer for his opera Trillium J (Roulette, NYC) and as a performer in his interdisciplinary Pine Top Aerial Music project. She has created collaborative works with other established composers including vocalist Kyoko Kitamura, bagpipes player Matthew Welch and numerous projects with bassist and electronics artist Carl Testa and vocalist Anne Rhodes. Rachel was a participating artist in the World Performance Project's Think Jam: Improvisation Across Disciplines, a symposium on improvisation at Yale University.

Rachel is the recipient of a 2020 CT Artist Fellowship, has received multiple commissions for new work from Artspace New Haven and received support for her work from NEFA's New England Dance Fund, the Foundation for Contemporary Arts Emergency Grant and the New Haven Mayor's Community Arts Grant. She will be an artist-in-residence May 2020, at the Karl Kemp Performance Space at the Balance Arts Center in NYC and has been a guest artist-in-residence at Montalvo Arts Center, an NEA Honorary Fellow at the Djerassi Resident Artists Program and a NYLA (Dance Theater Workshop) Fresh Tracks artist-in-residence.

Rachel is the founder of the performance space and movement laboratory, The BIG ROOM in New Haven, CT and curator of its interdisciplinary performance series, Take Your Time. The series' debut in May 2010 was profiled in the New York Times and received an overall Best of 2010 mention in the New Haven Register.

Rachel has been a visiting assistant professor at Trinity College, department of Theater and Dance and a guest artist at Rutgers University Mason Gross School of the Arts, Miami Dade College (MDC Live Arts Lab), Yale University, Wesleyan University, Texas Woman's University, Dartmouth College, among others. She's been on faculty at Movement Research, and taught in Russia as a teaching artist for the Moscow Dance Agency Tsekh Summer Dance Festival. She was on the dance faculty at The Educational Center for the Arts (ECA) high school from 2011-2014. Rachel maintains a private practice in the Alexander Technique.

Bernsen was a managing editor of and contributor to the Movement Research Performance Journal (MRPJ) and has written for the AmSAT News. She has served on the curatorial advisory board of Artspace New Haven and served as a board member-at-large for Elm City Dance Collective (ECDC). She's currently serving a second non-consecutive term as a board member-at-large of the American Society for the Alexander (AmSAT).

Rachel holds an MFA in Dance from New York University Tisch School of the Arts, a BA in English Literature from Macalester College and a national teaching certification in the Alexander Technique, M.AmSAT. She's also in-training to be a Feldenkrais ATM teacher.